Hatti, the place from which the gold mines derive the name, is in the Raichur district of Karnataka. This place is situated nearly 80 kilometres to the west of the centre of the Raichur district, and is considered to be a semi urban area. Back in the days of the British era, Hutta was a very small village. However, its position vis-a-vis the rest of Raichur and Karnataka improved significantly in the later years, and the presence of the Hatti Gold Mines has now made it a commercially important region in southern India. The presence of a Town Panchayat and a Labour Colony testify the growing importance of Hatti in Raichur. 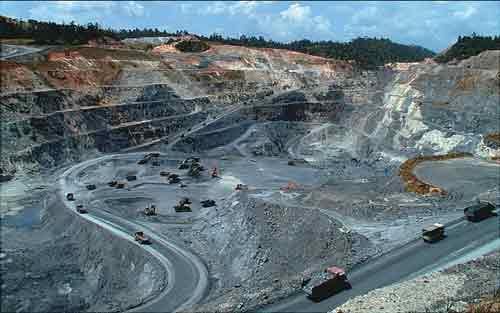 Ancient mining
Carbon dating technique, employed to determine the age of the gold mines in Hatti, have conclusively proved its presence since before the existence of Asoka’s empire. An Australian archaeologist by the name of Dr. Rafter has often been associated with the work done on determining the exact history of these gold mines. Besides Dr. Rafter, a number of other geologists and archaeologists have also forwarded their ideas and theories on these mines. According to most of the reports and evidences, the technique of fire setting is said to have been used in the ancient periods, in order to break the rocks inside the mines, by alternate heating and cooling.
Archaeological evidence also goes to show that a grinding stone was in vogue in the early days, to crush the metal ore and extract the gold. A mixture of crushed ore and water was then passed through goat’s skin to separate the heavy gold particles (which were trapped by the fur) from the lighter impurities.

Contemporary Mining
The Hatti Gold Mines had attracted a lot of attention of rulers, both foreign and Indian, primarily because of the never changing commercial value of the bullion metal. However, with the gradual evolution of the British administration in India, gold mining in Hatti took a backseat during the later half of the 19th century and the early part of the 20th century. This slowdown in activities in the mines was, however, offset by the Nizam of Hyderabad’s decision to reopen the mines in 1937, with an eye on boosting the employment scenario in the Princely State of Hyderabad. This decision of the Nizam was largely influenced by the sagging state of agriculture in the state, which was then being unable to satisfy the needs of the local population.
By 1940, detailed schemes were prepared to make the Hatti Gold Mines viable for the benefit of the state population. However, the outbreak of the Second World War dealt a blow to all these plans, and the idea of reopening was shelved indefinitely. However, the process commenced once again in 1948, after Indian independence. Since then, the gold production in these mines has seen a steady increase, and the prosperity of the mines has been directly reflected in the life of the locals, whose livelihoods were earlier confined only to agriculture.
Creation of Hutti Gold Mines Co. Ltd.
The original name of the Company, at the time of its formation in 1947 was Hyderabad Gold Mines Company. The Hyderabad State Government was then the majority shareholder of the company. However, this ownership pattern underwent a radical change when the reorganization of the states was done by the Congress Government in 1956. This led to the transfer of the ownership of the Company from Hyderabad to Karnataka State Government (which was then known as Mysore). After this major reorganization exercise the company which is presently in charge of mining gold from the Hatti mines, came to be known as Hutti Gold Mines Co. Ltd.

How to reach Hatti Gold Mines

By Road
Hatti has good road connections with a number of important Indian cities like Hyderabad and Bangalore. Besides a number of private bus and taxi service providers, the Karnataka State Road Transport Corporation also provides regular bus services between Hatti and the other parts of the state and the country.
By Air
One can get down at Hyderabad Airport, which is the nearest airport to Hatti, and thereafter use bus or taxi services to visit this place.
By Rail
The nearest railway station is the one located in Raichur. The Raichur Railway Station forms an important link in the Southern Railway and has connections with other major stations like Pune, Ahmedabad, Chennai, Delhi, Mumbai and Bangalore.