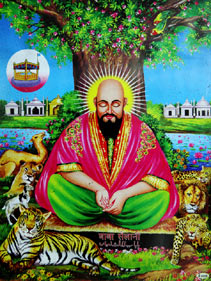 The famous tomb is the place where the Islamic saint – “Pir Sailani Shah”was placed after his death. Begin placed in Raichur, the tomb is a beautifully designed piece of architecture that was built in Bijapur architecture. Driving in a lot of visitors and tourist due to its well architecture and crafty design, one of the tombs main attraction lies in its rectangular shaped hall and dome.

Architecture of the Pir Shah Tomb

Having an arched opening on each side of the tomb, the stone pillars upon which the arches are built have an architectural touch and carvings on them. The tomb is also surrounded by a narrow dome which is placed over a circular row of lotus petals. This narrow pathway is ornamented with four small and slim turrets at the corners giving it a more ethnic look.

As for the huge gateway that is placed is named after the saint itself, being called as the “Sailani Darwaza” – meaning “The Door of Sailani”. The tomb was built with the intention of giving the saint a peaceful place to rest given his personality and his calling towards his religions ministry. Having served as a saint for majority of his life, Pir Sailani Shah was a well-known saint whose works were well accepted by the people around him.

The tomb was more of a tribute by the people and dynasty from where he belonged and it was taken care of that the arrangements were taken up well and done, as it is one of the most well designed and beautifully created tombs present in the Raichur district. Being a rectangular shaped tomb, the entrances were smartly placed at every corner, with the distinguishing factor being the various designs and carvings done on the pillars and walls within the tomb.

Some of the interesting stories about Pir Sailani Shah were that he was believed to be so devoted that animals were considered close friends with him. Being close to nature and walking hand in hand with wild animals, it was believed that the saint would feed tigers and other wild animals without thinking twice. He was considered to be a true saint from God who was in one accord with animals and nature so much so that his life reflected holiness.

The Tomb of Pir Sailani Shah is definitely a must visit one, since it shows the craftsmanship and architectural beauty of how people in the early ages would consider building monuments and tombs.