The Raichur Thermal Power Station - RTPS in Raichur is one of the well-known thermal power plants in India that uses coal as its raw material for electric power generation. The power plant is owned and functioned by the Karnataka Power Corporation Limited- KPCL a state government agency of Karnataka state. RTPS is the first of its kind thermal plant established in Karnataka.

The Raichur thermal power station supplies electric power to numerous towns and cities in Deccan region of Karnataka which opened gates for the commencement of numerous small and big scale industries in the Deccan region which led to economic growth in Karnataka.

The Raichur Thermal Power Station project was finalized in the year 1978 upon a MOU agreement signed between Karnataka State Electricity Board and Karnataka Power Corporation Limited. The Krishna River banks close to Riachur was chosen for the establishment of the project. The foundation for RTPS was laid by the then President of India Shri. N. Sanjiva Reddy in 1980 January 18th.
Initially the RTPS project had two stages for installing four units of thermal power plants (2 units each under both stages) for which 300 hectares of plot was chosen. Unit 1 was completed in 1985 March 29th, Unit II was completed in 1986 March 2nd, Unit III was completed in 1991 march 30th and Unit IV was completed in 1994 September 29th. Each of the four units has a capacity to generate 210 MW electric power. 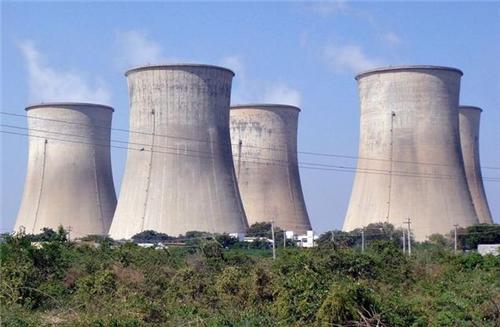 Coal is used as raw material for power generation in Raichur Thermal Power Station. Coal to RTPS is provided by Western Coalfields Limited and Mahanadi Coalfield Limited. The coal brought to RTPS undergoes serious quality check using computerized testing and laboratory testing before being used for RTPS power units. Recently washed coal with low ash content is also used by RTPS for power generation. Coal is brought to RTPS through rail wagons to the site directly.

To cool the power plants water is used from the River Krishna. The quality checked coal is crushed and sent to furnaces that convert water to stream. The stream thus generated is passed through the turbines to generate electric power. The 8 unit in RTPs generate 35 MU of electric power per day.

The Ash wastage from the power plants is removed by Slurry pumps and Pump pneumatic system. The  removed ash is disposed in 193 hectares of land in the north end of the RTPS which is specially allotted for ash disposal.